What are Chimney Dampers and How they Save YOU Money!

by Nicholas Hoff | Helpful Tips, Parts of a Chimney 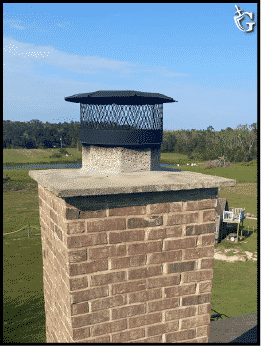 Chimneys are often associated with fire and warmth, but they can actually dampen a home’s heat without the proper part to ensure they don’t let the warm air escape.  The same way many are against leaving the fridge o[pen to prevent cold air from leaking, the chimney provides an avenue for the warm air conditioned air to escape.  Today we’ll be talking about that small and specific part of the chimney, that does a large and important job, the money-saving Chimney Damper.

Chimneys are, in effect, a hole in the house. Mostly meant to allow for the release of smoke and other harmful gasses. But with them, most heat from a fire just escapes up the chimney. Now, this is fine, fires generate tons of heat, and very few think that lighting a fire will bring warmth to the entire room anyway. No, most light the fire to gather around and stay extra tasty with covers and some snack. Maybe even a nice book in the warmly lit room, listening to the soft crackles of the flame.

However, even when a fire isn’t burning, heat can be escaping out the flue. Should the hole remain open, then much of the money spent on heaters and their work is simply escaping the house. The other possibility is the air from the outside coming in and cooling the home with drafts. Either way, if the chimney is open, then the heating cost is liable to go up. Yes, you are actively losing money as the heaters have to work harder to make up for lost heat due to your chimney if you lacj a chimney damper.

Okay, so What’s the Solution?

It’s the chimney damper or the fireplace damper. Before we had discussed the problem of rain coming down the chimney—dampers actually do a pretty okay job at preventing rain from going in but are not specialized for it. Their primary function is, as described before, to open and close the clue and keep conditioned air in as well as keeping unconditioned air out, saving you money on heating in the end.

There are different types of Dampers. Mainly the Top Mounted and Throat varieties. Both, in the end, can be opened and closed and have varying pros and cons. There are also spin dampers, used mainly for stoves to manage oxygen flow and the fire.

These dampers are installed on top of the chimney flue. These dampers are air-tight via a rubber seal. They are effective in keeping out wildlife, including insects, in the summer. They can also have spark arrestor screens installed, but as they cannot be installed with a chimney cap, a more expensive variety is constructed to combine the two. These are also easier to install. These eases come with downsides however, as they do let some heat escape up[ the flue. While it never leaves the house, it gives the conditioning of the building more space it has to work to heat. The collection of heat pocketed under these dampers also can spur downdrafting.

A Case for Throat Chimney  Dampers

The chimney, even with a top-mounted damper, holds cold air. Throat dampers are located right above the fireplace at the chimney’s base. This set-up better separates the conditioned and unconditioned air. These usually are plates and are favored when building a home. However, they are more expensive and difficult to fix or replace should they be broken. Throat dampers provide better control of airflow compared to their counterparts and do not assist in the production of downdraft nearly as much as their counterpart. They however provide little protection against wildlife, a task they don’t have to fulfill with chimney caps already existing.