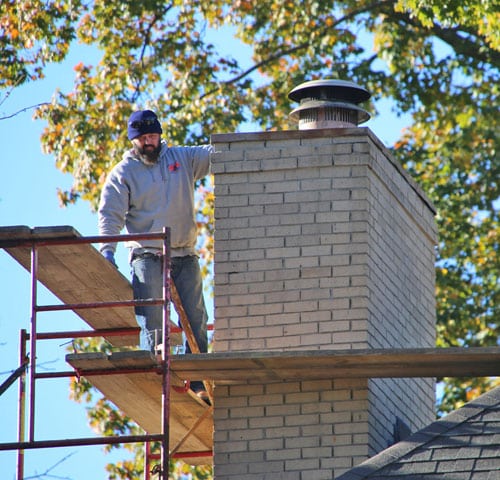 Think about your chimney. Do you know the current state of all the components? Do you know where there is damage or breakdown started? What are the signs of serious damage? As the homeowner, you cannot answer these questions with any certainty. To have that certainty, you should call a professional chimney company. Chimneys, especially those connected to a wood-burning fireplace, perform a critical job. These allow interior air to get into the fireplace sustaining fire and providing a channel to draw outside air. A perfectly sound chimney will do this perfectly. If a chimney has issues or damages then it will not operate properly. A chimney that does not work properly can cause damage to your home and those living inside. Below are seven common types of damages found during a chimney inspection.

Over years of use, the brick and mortar that comprises the chimney structure can begin to deteriorate. Some early signs include cracks and crumbling, which can let in water, which does speed up the deterioration process. Freeze and thaw cycles cause water to expand and break apart the structure.

Stains on the Chimney Exterior

White stains usually come from salts left behind water evaporation. This water could be on the outside of the chimney, or it could have gotten into the structure. Black stains mean there is an excess amount of soot in the chimney that needs to be cleaned out. There are many other possible types of chimney stains, which need to be examined by a professional.

Creosote, smoke from burning wood, clings to and buildup on the inner surfaces of the chimney. An excessive amount of buildup can obstruct the airflow. This material increases potential chimney fires due to how combustible and flammable. A trained chimney sweep can perform a thorough cleaning to remove creosote and soot.

Dampers that will not fully open or close will cause an air-flow problem during a fire and will allow outside air into the home, and vice-versa when a fire is not burning. Dampers can be cleaned or replaced if deemed necessary.

Chimney caps cover the opening of the chimney to protect against debris, small animals, and water, which can become rusted and begin to deteriorate. A damaged chimney cap needs to be replaced or repaired. These are only seven of the elements focused on during an inspection by a chimney professional. If it has been a while since your chimney has been swept or inspected, give SootMaster a call at 888-768-0818 to schedule a thorough inspection and sweep. We are proudly serving several locations including – the Florida Panhandle, Alabama, and the Gulf Coast of Mississippi.