Chimney leaks are a common problem often caused by a number of reasons. Chimney inspections are very important because they can help detect leaks early enough before they become worse.

Here is what you can do to fix chimney leak issues.

Chimney Leaks Cause #1: Your Chimney Lacks a Cap or Cover 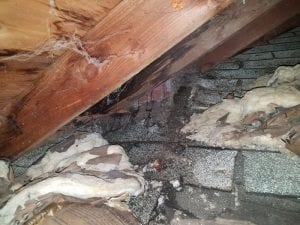 One of the major causes for a leaking chimney is that the chimney does not have a cover or cap on it. When your chimney has no cover on it, it is exposed to rain, debris from leaves, as well as animals. Consequently, several animals can enter or fall straight down inside. As well, a chase cover or cap can protect your chimney from rain and snow.

While a blocked chimney can lead to a chimney fire, a clogged chimney does not release smoke which leads to possible carbon monoxide poisoning.

To solve this, we recommend getting a chimney cap or cover. They are relatively inexpensive, and easy to install.

Chimney Leaks Cause #2: Worn Out Bricks and Mortar Joints

The mortar and bricks on your chimney undergo tough conditions since they are exposed to harsh weather. This makes them highly vulnerable. Over time, the bricks  and mortar holding the chimney together may crack. Additionally, when the joints get damaged and split, the result is a chimney leak.

A chimney leak means water can  make its way inside of your home. One  preventive measure you can take is to do a Masonry Absorption Test (MAT). A MAT  involves using a test tube to gauge how long it takes for water to get absorbed into the chimney wall. This will show you how waterproof your chimney really is.

Additionally, if you notice your chimney is leaking, but you are sure you have a cap that is in good condition, then worn out brick or mortar is the culprit.

Get a professional to repair it as soon as possible to avoid further deterioration.

Another frequent cause of chimney leaks is a cracked/damaged chimney crown. Chimney crowns are the cement slab surface at the top of the chimney. Their function is to keep rain out and to also protect the chimney from other harsh weather conditions. Over time, the concrete can crack due to rain and changes in temperature.

When cracked, water and moisture can seep in. In worse scenarios, especially if the damage is prolonged, the crack can become too hard to handle and can change the chimney’s structure. Small cracks just need coating, but larger ones would need crown replacing.

The tar used to seal it, is normally waterproof but that usually wears out with time. Your chimney flashing is the area where your chimney comes through the roof, or close to the roof. It prevents moisture and other debris from getting in-between the chimney and the roof.

It is advisable to repair a damaged flashing immediately. If not handled as soon as possible, then not only your chimney and roof are at risk, but your home is also at risk. Furthermore, ensure the flashing you get is waterproof so that it can keep going for a few years.

In rare cases, leaks can be caused when a chimney is converted from wood burning to gas burning  without a properly fitted liner. Gas fireplaces emit fumes with moisture because of lower temperatures. As well, if the correct liner is not installed, the moisture can build up and get through your chimney walls. It is important to ensure that you have a fitted liner regardless of what chimney you have.

If you need a chimney inspection to ascertain a chimney issue we are here to help you!