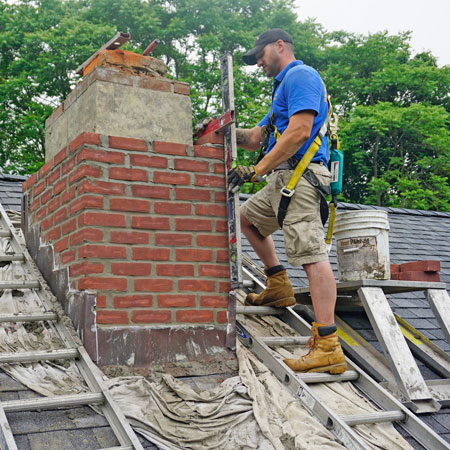 There are many types of chimneys that I have yet to talk about and their differences. Three of which people may typically think of when thinking of fireplace, masonry chimneys, metal chimneys, and prefabricated chimneys. However, stove chimneys are their breed, and within each of the categories are subcategories.

At its base, all a chimney is a tube up from the box to let out dangerous and possibly harmful fumes. This tube can be called the flue, and the place where the fire is lit is the firebox/fireplace. The bit extended from the bottom of said part is the hearth.

Masonry chimneys are the most complex and, in some eyes, “the standard chimney,” with the flue being hooked after it passes the lintel. The first thing that may be seen is the chimney damper (Click here to learn more), provided it is a throat damper. Should it be a top-mounted damper, it will be on top, of course.

Next, come the smokey duo, the smoke shelf, and the smoke chamber, which work together to fight against downdraft and prevent things from falling into the firebox. The smoke shelf is the hook itself, located directly above the firebox and below the chamber. The smoke chamber then is the way that said space transitions into the flue. It takes up the smoke and needs to be smooth to allow smoke to draft up efficiently. In the case where they are rough, drifting will be impaired, and creosote build-up is likely.

The flue itself is just the vent that takes the smoke up and outside the home. The flue is likely lined with chimney liner or flue liner, protecting it from acid, heat, and water damage.

Topping the flue may be either a chimney crown or chimney cap, which we discuss more here. In short, they are structures sometimes atop a chimney, crowns a slab of cement that covers all but the flue pipes and thusly protect it from things getting in or rain damage. The cap does a similar job but protects better against debris and small animals. The chimney shelf should remain clear of debris with either or both of these structures, but it is just a bit of extra security.

Bonus features, masonry chimneys look nice, and the materials used to make them are good at keeping and holding heat. With that, they are durable, with a lifespan comparable to the house itself. The problem is that it requires a proper foundation and concrete, which if not installed during construction, would be both expensive and disruptive to daily life to have installed after.

Metal chimneys are not ideal or recommended for most homes, but they stand out in an arguably lousy way, are expensive, and not accommodating. They can be contained in masonry or wood for aesthetic purposes for an extra cost or left bare if one needs that high-tech look.

A likely better idea for a later installation, “prefab chimneys,” sometimes referred to as “factory-made chimneys,” are much less expensive and can look just as good if not better. They have many variations and serve as the middle ground between the Masonry Chimneys and Metal Chimneys.

Prefab chimneys have a firestop, as they are not part of the building itself, as buildings shake and settle over time, which proves dangerous. Masonry chimneys are part of the house, but prefabs are not. This, however, means gaps are present in the spaces between the chimneys, the walls, and the roof. With these gaps, should a chimney fire occur, it can quickly spread through these gaps. To stop this, the firestop is placed, a square piece of sheet metal with a hole in the middle for the piping to fill up that space. Some will also have foam sprayed around the firestop in the clearance area.

Besides that, these chimneys have flashing. Masonry chimneys also often have flashing, but it is not always present. Flashing is meant to waterproof and seal the area around the chimney and the chimney itself for the same reason firestops exist, the clearance. There are three parts to the flashing: Step flashing, a piece of metal bent into an L shape that lies under the shingles, and the masonry brick. Counter/cap flashing, one which essentially is another step flashing, but this one covers the step flashing and is placed embedded into the chimney’s brickwork. Lastly, base flashing is the joint between the vertical surface of the chimney and the roofing surface.

Prefab chimneys are made in a factory and brought to the home for installation, make sure to get a fireplace and chimney that match each other’s specifications, and it should be fine. Internally, these chimneys are just metal chimneys, meaning they are essentially flue with a chimney cap. They are often built around brick or masonry for aesthetic value; when done well, they look just as good but will not last nearly as long. They are not the most durable overall and are prone to age over time. These are likely to need replacing.

As such, though, by their nature of being premade, there are types. Double-Walled takes a double-walled metal chimney and surrounds it in masonry, but they are still lighter than masonry chimneys and can be easily installed with little hassle. Next, air-insulated, these chimneys are essentially the triple-layered metal chimney, but their number of layers can vary; they are praised for relative longevity, extreme colds, and high durability as a trade-off to ease of installation. Lastly, the Air-cooled, where the air flows between the metal layers, but in extreme cold, they are very likely to corrode via condensation, the least costly option on average.

Two types of these chimneys connect directly to the stove. Freestanding is chimneys on their own, just standing waiting for a stove to be installed or inserted into it. There are also old Stove chimneys which ere a pipe which rose from the stove into a chimney.