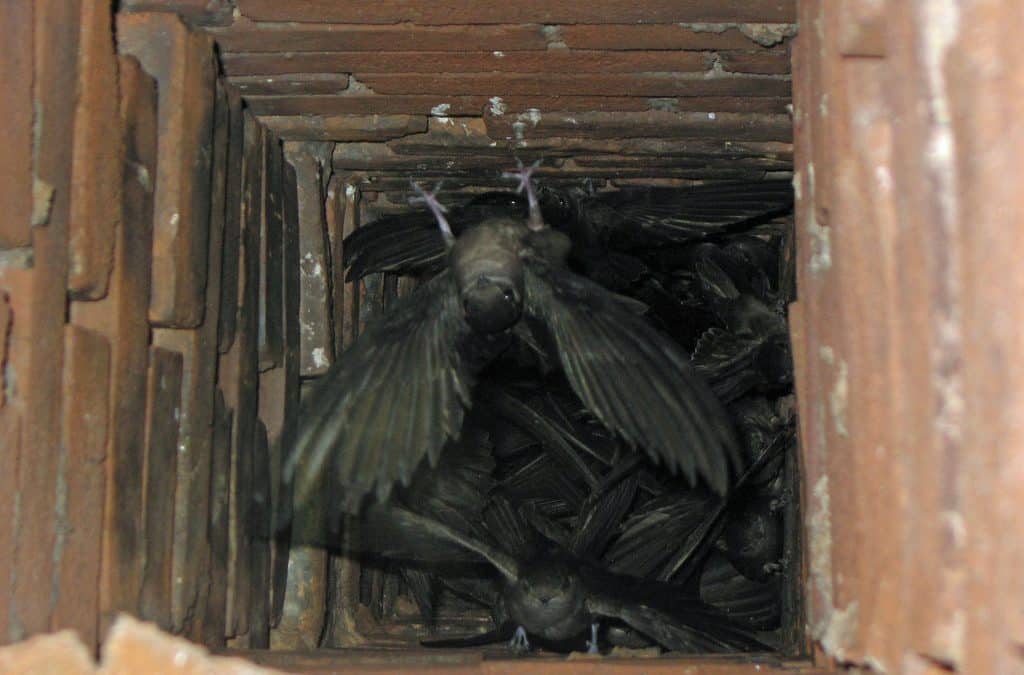 Many animals may try to call your chimney home. But the most obvious one to people is likely to be avians, in other words… birds! Birds—scientifically called Aves, a class belonging to the phylum Chordata—are like mini-flying dinosaurs and some of the closest animals to the fan-favorite reptiles. They are undoubtedly some more friendly ones; not many are willing to get up close with a crocodile.

So what type of dino-descendants are trying to call your chimney home? It’s a fun game to play if you ever hear a chirping from your fireplace to try and identify the little guys before having them removed.

Chimney swifts are up first. The most obvious contender, these birds, are straight-up named for the fact that they love chimneys. At least the older model, open masonry chimneys, modern chimneys are too narrow and capped, thus being inhospitable for these birds. Sadly, this change, along with deforestation, has led to Chimney Swifts losing places to call home.

Chimney Swifts or Chaetura pelagica make homes in manufactured structures, with feet specifically designed to cling to flat vertical surfaces instead of perching like most of their kind. Initially, this feature was used to attach to the insides of hollow trees, but over time the birds found themselves using chimneys more often.

Best identified by their smoky brown, slender tube-shaped bodies paired with long curved wings, Chimney Swifts are smaller than a robin but larger than a sparrow. They are also migratory birds, and as such, they are federally protected. Meaning that if you have a flock of them chirping away in your chimney, it will prove challenging to have them removed. However, there is good news in this, as the chicks chirping away only start getting noisy around 14 days old, and they leave around 30 days old, or in two more weeks. During those weeks, as a trade to giving them a home, they will eat any insects that come their way.

The only way to have them leave is to let them go on their own, and the best way to keep them out is to have a chimney cap installed.

The Not So Obvious

Having gotten the swifts out of the way, we can move on to the other birds who are willing to make a home in your chimney.

A widespread songbird brought but Shakespeare enthusiast who wished for the USA to house every bird ever mentioned by the prolific poet. Let us give attention to the European Starlings or Sturnus vulgaris, a bird that makes home nearly the entire mainland USA and a good bit of Canada and Mexico. These birds are quick and have a base color of black with purplish-green iridescent; when not breeding, they appear spotted. Their bills also change color from a dark greyish brown to a glorious yellow. We can remove these guys; however, if you wait, they likely will leave eventually.

Another typical face in the chimney is Barn Swallows or Hirundo rustica. These little vagrants are similar to Chimney swifts. They lived in caves before adopting artificial structures as their homes; they are the most abundant and distributed swallow species. Like the swifts, they are federally protected. Perhaps best identified by their nest made of mud and grass as a half bowl attached to a flat surface. The adults are small, with broad shoulders and pointed wings as well as the signature swallowtail. Adults are marked with blue, a rusty orange, and a creamy tan underside; chicks orange and brown, with the blue being a darker brown, the tail also is short and has no fork.

Larger birds can also end up in chimneys, though less often are they trying to or plan to raise a family. Instead, they more often fall in and get stuck. Wood Ducks (Aix sponsa) and Barn Owls (Tyto alba) are the likely suspects in these cases; to help them out, leave a door open, turn off the lights, and open the flue. They will most likely fly out; you can also call a specialist to have them removed or rehabilitated as it is probable that they were injured in their panic.

The waste left by these birds is flammable and likely to cause a chimney fire if touched by any stray sparks. No matter the case, it is best that you get a chimney sweep after the birds are out. The sweep will ensure that nothing is left inside and that no birds are calling your chimney home. At Sootmaster, our experts are trained to help these birds out when able humanely and install preventative measures like a chimney cap. So after you’ve identified your guest why not book us here?